How GPS works and its applications? 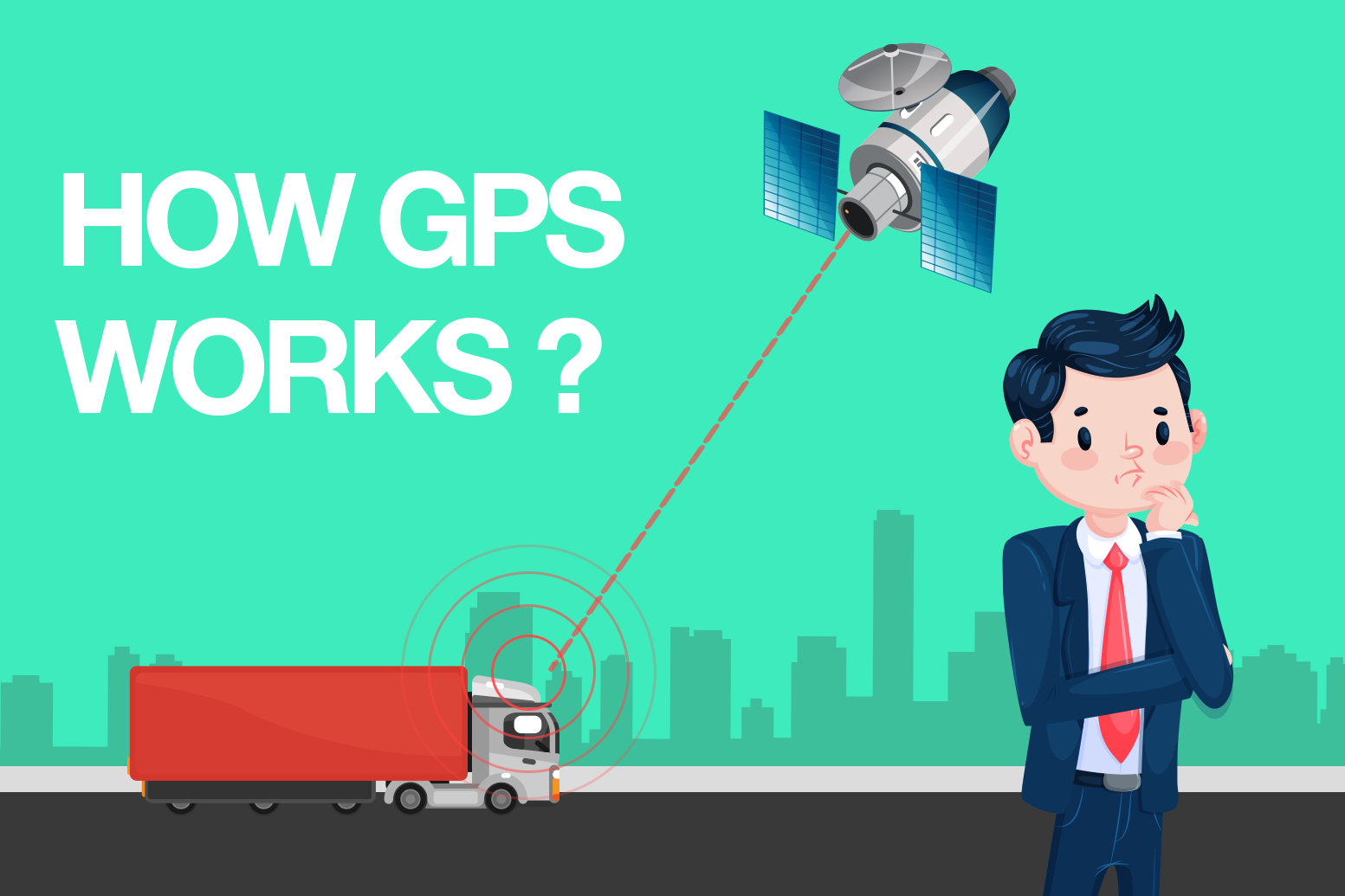 The US Government developed and owns a radio navigation system. It provides positioning, navigation, and timing services to the public called the Global Positioning System (GPS full form). The US Department of Defense launched GPS firstly in 1973 and called it NAVSTAR, exclusively using it for defence and military purposes with no provision for civilian use. Civilian use was partially and selectively allowed in the 1980s, however, it was not until 2000 that it was common practice for the general public’s benefit. A full constellation of 24 satellites was put in orbit till 1995, given that the first prototype satellite was launched by the US Govt in 1978 with 23 more satellites inducted in the following years. Consequently, in 2000, it was made fully functional for public use. How GPS works you will learn the next article.

Also read: How to use a child tracker system for safety?

Different Navigation systems around the globe

Since the US Government grants or denies access to any user or group of users and can degrade the quality of service being provided. This has prompted several countries to develop and launch their own satellites to provide GPS Services. For example, Russia’s Global Navigation Satellite System (GLONASS), European Union’s (EU) Galileo positioning system, China’s BeiDou navigation, Japan’s Quasi-Zenith Satellite System (QZSS) and India’s NAVIC, are some of the famous examples. 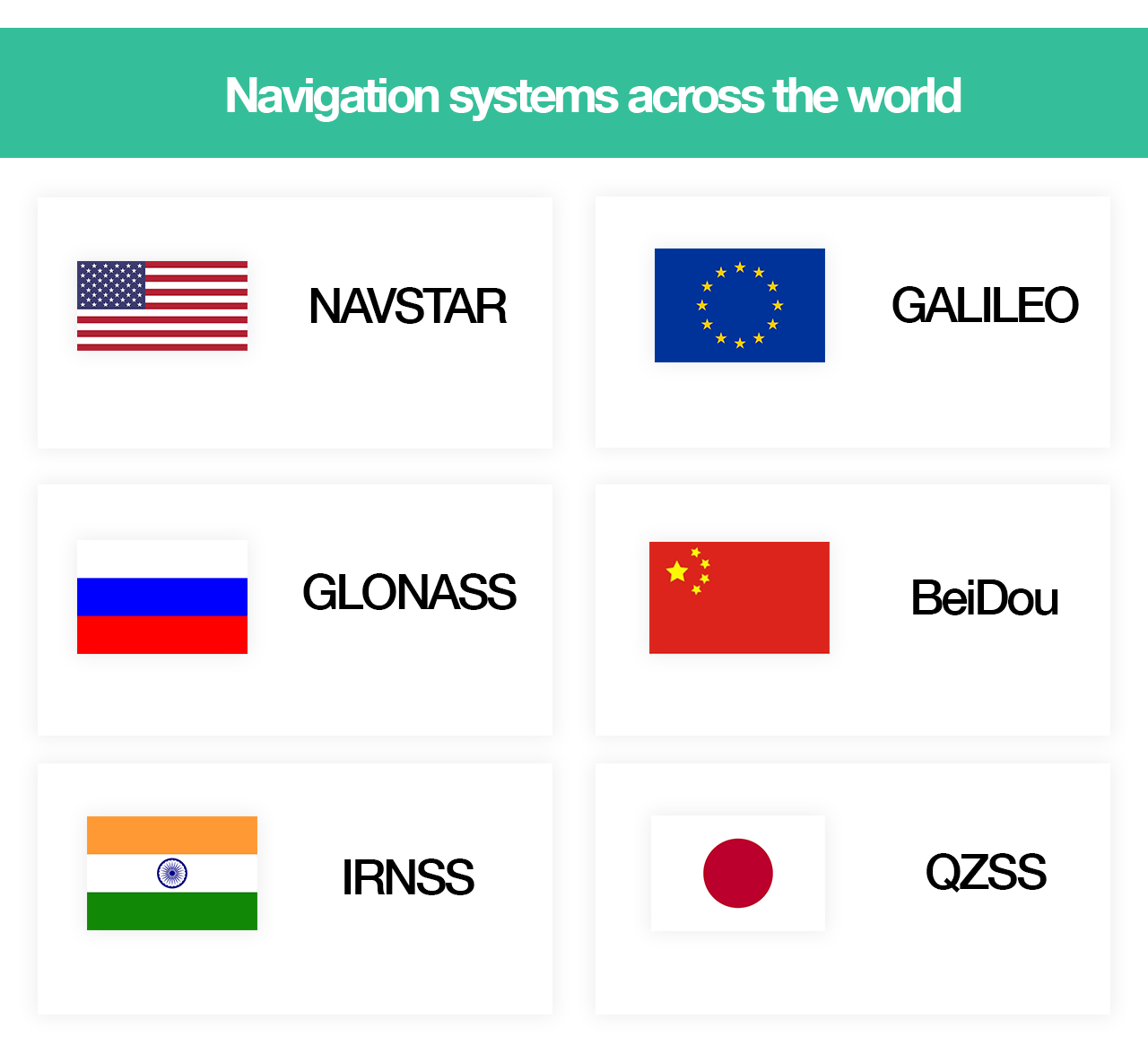 The technology behind GPS or how GPS works?

GPS is basically based on the time and known positions of the satellites. The satellites use ultra-precise atomic clocks to synchronize with each other and also to the receivers on the surface of the earth.  The atomic clocks must perform the synchronization with the utmost care and precision to give an accurate and correct reading without any discrepancy.

How GPS works – The satellite transmits radio signals at regular intervals carrying information. This information is about the time and its location at that point in time. The receiver has to monitor information from multiple satellites to calculate and identify the precise location. For this purpose, at least 4 satellites have to be in the viewing field of the receiver. 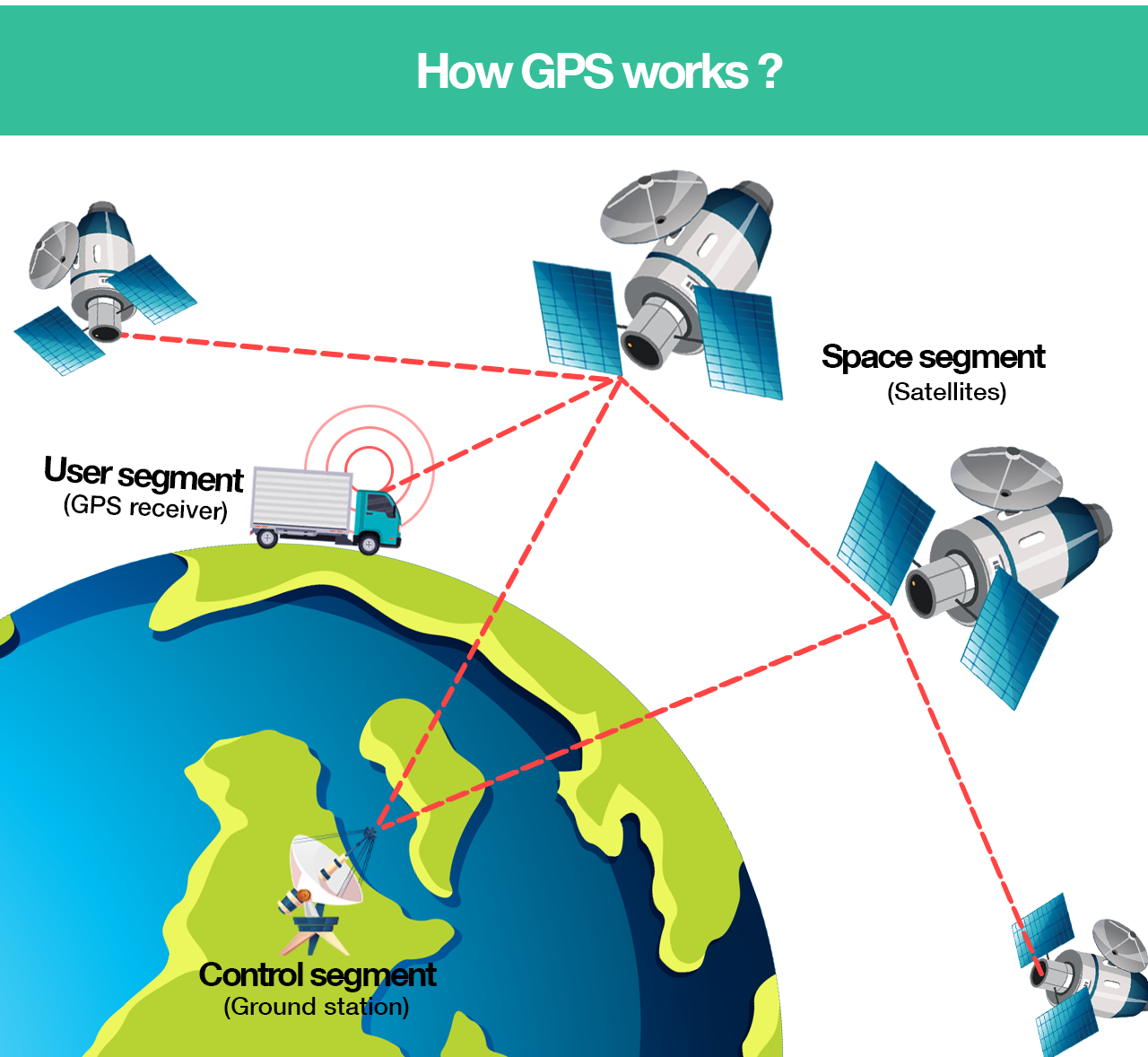 The space segment is the constellation of satellites (usually 24 to 32) which moves in a circular orbit around the earth. The GPS system is made up of a  total of 27 satellites from which 24 are operative and 3 extra satellites are kept on standby in case of any functional error by the operational 24 satellites. With this expanded constellation 9 satellites are visible at any time which certainly improves the reliability and accuracy.

Using the control segment we can monitor and control stations on the ground to catch the radio signals sent by the various satellites. The control segment also synchronizes the atomic clocks so that there is no error in the reading. the orbit path of the satellite can be maneuvered by using this.

The user segment is the receiver that uses the transmitted data to estimate the precise location of the user. The number of satellites it can monitor simultaneously (called Channels) defines the user’s capability. Significant improvements have been made over the past few years and the number of channels that are available can range anywhere between 12 to 20 in contrast to just 4 or 5 which it was initially limited to.

Also read: The 5 most vehicle theft-prone states in India

What is Trilateration? (Science behind how GPS works)

What are the applications of GPS?

Primarily, a GPS tracking system will monitor the movement of an object in which it is installed. This system proves to be an important tool on a daily basis due to:

1.  Determining the location of the Vehicle in case of any theft or robbery.

2.  It gives us an indication regarding the time taken to reach our destination by analyzing traffic movements.

3.  Giving the passengers information about the current and next stop in public transit systems.

4.  Search operations conducted by the defense and military services can use GPS.

The areas in which we can use GPS are:

1.  Logistics: You can trace and track each and every consignment with the help of real-time location and estimate the time of delivery and costs involved in carrying out the whole operation. Due to this, you can manage and monitor your entire fleet from a single mobile-based application.

2.  Municipal Corporation: You can track your entire fleet of vehicles and keep a count and exact location of the different assets owned by the corporation.

3.  Drones and UAVs: Locate and track your Unmanned Aerial Vehicles and drones and prevent any loss or theft-related accident.

4.  Heavy Equipment: Keep an eye on the activity status of the entire fleet of vehicles and deploy vehicles as and when required in a detailed and systematic manner.

5.  Rental Bikes and Cars: Track and trace each and every vehicle which is rented to monitor the route taken and distance covered by the vehicle. This will also help provide a detailed billing description which the customer cant refute. This also prevents cases of theft and robbery.

6.  Delivery Monitoring: Restaurants that deliver instant delivery services need to monitor their personnel to make sure that the customers are satisfied and return to give them business in the future again. 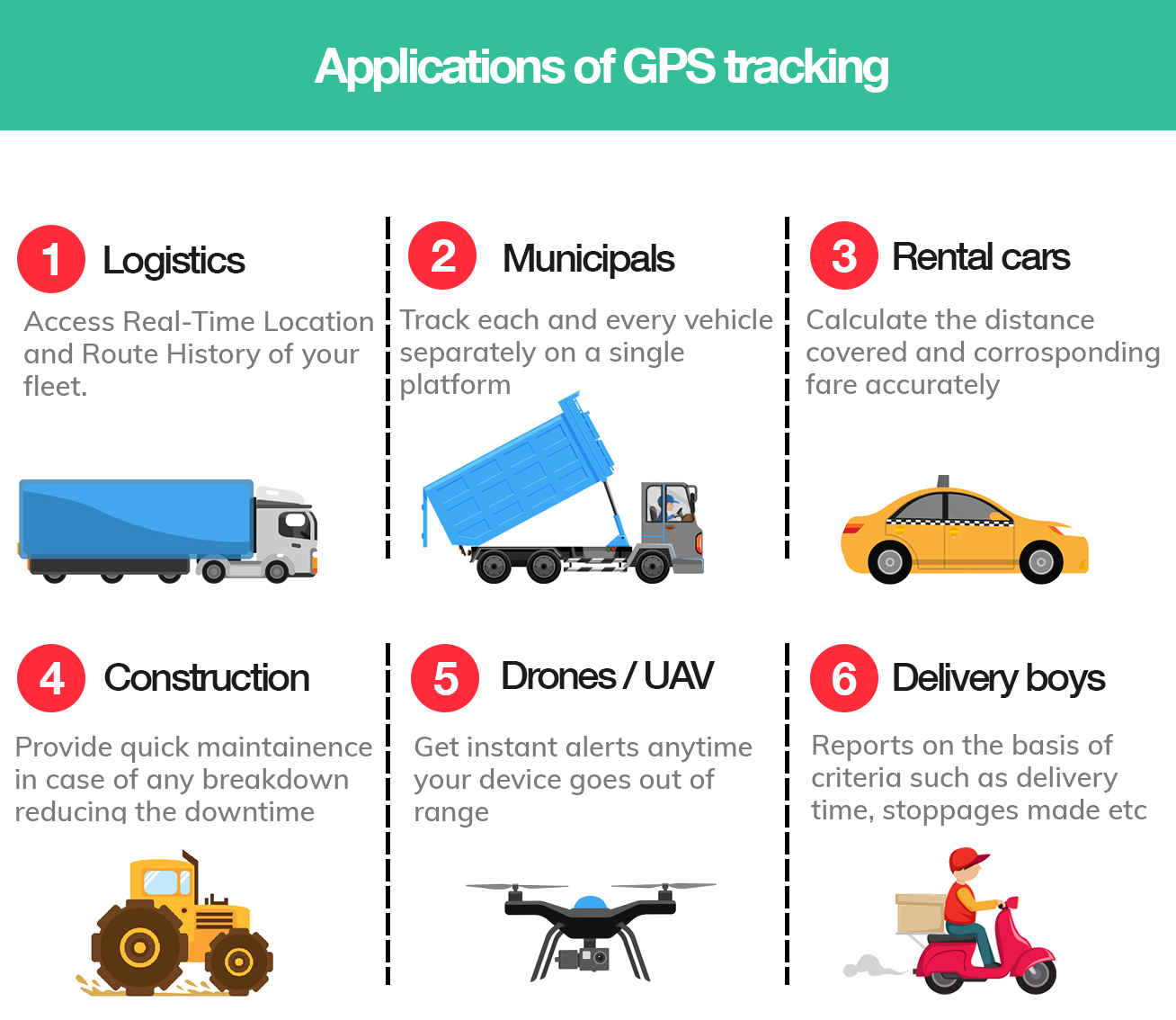 India has developed a dedicated and autonomous regional satellite navigation system called the NAVIC which stands for NAVigation with Indian Constellation. It basically covers the Indian mainland and an area ranging 1500 kilometers around it with plans to extend it further. 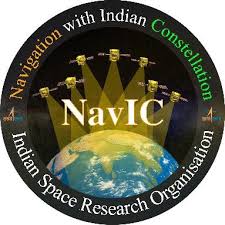 A constellation of 7(seven) satellites with a back-up of 2 satellites on the ground are currently in use. It provides 2 services one accessible to the general public (planned to be accessible in 2020) while the other is for military use being in orbit since 2018. This has provided an accuracy of sub-10 meters throughout India’s land and sub-20 meters anywhere in the Indian Ocean.

Furthermore, there are plans to increase the number of satellites from 7 to 11. There are also plans for the development of atomic clocks and the ultra-stable atomic clock which will be initiated in the future.

How to use GPS trackers to track your vehicle?

The salient features of Onelap’s GPS Tracker are: 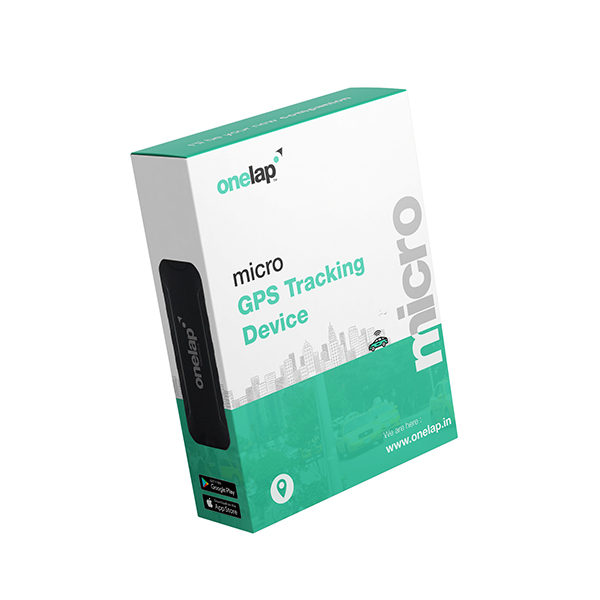 1. Firstly, real-time tracking of your vehicle via an application on your mobile phone.
2. Vehicle performance statistics.
3. Data History.
4. Remote Engine Immobilization at your fingertips accessible from anywhere.
5. Define Geofences or Safe zones on the map.
6. Much more affordable than other GPS tracking solutions in the market.

Drop  Whatsapp message  +91 – 78272 17494  for any queries about how to choose a tracker or to book Onelap Telematics (Hardware or Software solution).

Onelap is a software developer of powerful fleet management and intelligence platform. Our platform currently used by more than 4000 users across 3 countries. It enables end-users and businesses across many different verticals and markets to track. Key benefits: - Feature-rich and cost-effective service - Flexible and highly scalable platform, available as cloud-based and server-based versions - Integrated support for more than 1500+ types of telematics devices, - 24x7 technical support - Open API for integration with existing back-office systems - SDK tools to develop custom functionality To buy Onelap GPS tracker on Amazon: https://amzn.to/2mqCe56 Reach out to us: Toll Free no : 1800 103 0274 Whatsapp: +91 78272 17494 Email - sales@onelap.in